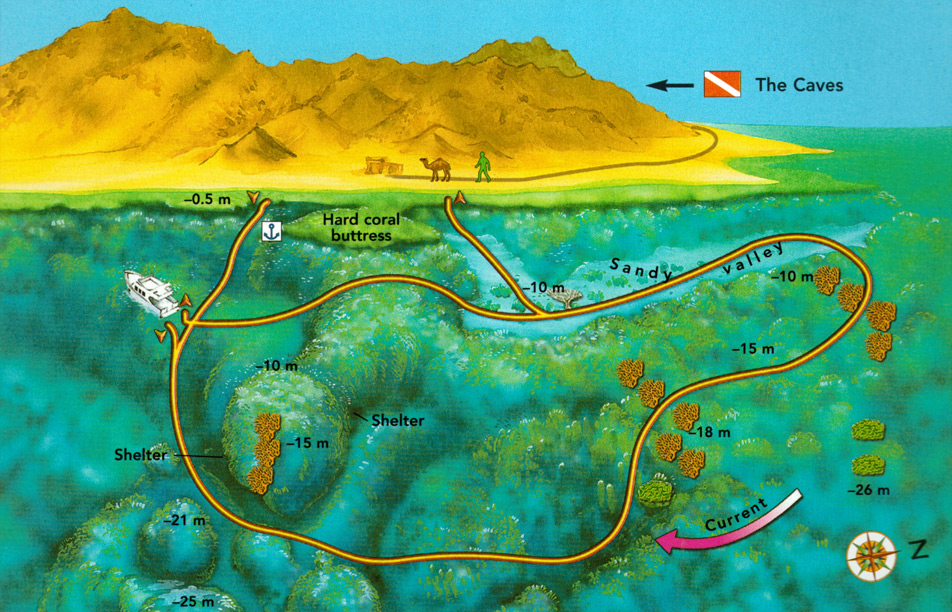 Gabr el Bint ranks among one of the most attractive sites of North Sinai. With the access by boat, 4x4 or by camel, it is less frequently dived than the other dive sites in Dahab which has left this site in pristine condition. Gabr el Bint means 'The Grave of the Girl' in Arabic. There are two dives possible here.

The right side, also known as the dark side, features a steep wall that drops down to about 60m cut by numerous chasms, sandy ravines and overhangs. The drop-off is adorned with healthy table corals. The left side is a far more colourful featuring a virtual forest of gorgonians. Usually drop down to about 20-25m swimming along massive boulders protruding from the drop-off which attracts dense shoals of anthias and glassfish.

Keep a good eye on the blue where you will see trevallies hunting on the shoals of fusiliers. After about ten minutes you will find some of the healthiest gorgonian fan corals in the Red Sea. Here you start to ascend to about 10m and cross the saddle then start to head back along a sandy ledge which parallels to the shore.

The ledge is riddled with exquisite coral heads that attract numerous reef species, including swarms of anthias, scorpionfish, parrotfish, crocodilefish, surgeonfish, triggerfish, trumpetfish, stingrays and very often a turtle. At the end of the ledge usually is home to a shoal of black and white snappers and twinspot snappers hang here between 5m and 10m. One of the truly breathtaking dives in Dahab.